It would seem that Micron this morning has accidentally spilled the beans on the future of graphics card memory technologies – and outed one of NVIDIA’s next-generation RTX video cards in the process. In a technical brief that was posted to their website, dubbed “The Demand for Ultra-Bandwidth Solutions”, Micron detailed their portfolio of high-bandwidth memory technologies and the market needs for them. Included in this brief was information on the previously-unannounced GDDR6X memory technology, as well as some information on what seems to be the first card to use it, NVIDIA’s GeForce RTX 3090.

The document seems to have been posted a month (or more) early, given the mention of the NVIDIA card, which we’re not expecting to be announced any sooner than at NVIDIA’s September event. Furthermore the document links to other, still-unpublished Micron technical briefs involving GDDR6X. None the less, the document does come directly from Micron’s public webservers, so what we have today is an unexpected sneak peak at Micron’s upcoming GDDR memory plans.

At any rate, as this is a market overview rather than a technical deep dive, the details on GDDR6X are slim. The document links to another, still-unpublished document, “Doubling I/O Performance with PAM4: Micron Innovates GDDR6X to Accelerate Graphics Memory”, that would presumably contain further details on GDDR6X. None the less, even this high-level overview gives us a basic idea of what Micron has in store for later this year.

The key innovation for GDDR6X appears to be that Micron is moving from using POD135 coding on the memory bus – a binary (two state) coding format – to four state coding in the form of Pulse-Amplitude Modulation 4 (PAM4). In short, Micron would be doubling the number of signal states in the GDDR6X memory bus, allowing it to transmit twice as much data per clock.

PAM4 itself is not a new technology, and has been used in other high-end devices like network transceivers well before now. More recently, the PCI-SIG announced that they’d be adopting PAM4 coding for PCIe 6.0. So for a slightly more detailed discussion on PAM4, here is our explaination from our PCIe 6.0 primer:

At a very high level, what PAM4 does versus NRZ (binary coding) is to take a page from the MLC NAND playbook, and double the number of electrical states a single cell (or in this case, transmission) will hold. Rather than traditional 0/1 high/low signaling, PAM4 uses 4 signal levels, so that a signal can encode for four possible two-bit patterns: 00/01/10/11. This allows PAM4 to carry twice as much data as NRZ without having to double the transmission bandwidth, which for PCIe 6.0 would have resulted in a frequency around 30GHz(!).

PAM4 itself is not a new technology, but up until now it’s been the domain of ultra-high-end networking standards like 200G Ethernet, where the amount of space available for more physical channels is even more limited. As a result, the industry already has a few years of experience working with the signaling standard, and with their own bandwidth needs continuing to grow, the PCI-SIG has decided to bring it inside the chassis by basing the next generation of PCIe upon it.

The tradeoff for using PAM4 is of course cost. Even with its greater bandwidth per Hz, PAM4 currently costs more to implement at pretty much every level, from the PHY to the physical layer. Which is why it hasn’t taken the world by storm, and why NRZ continues to be used elsewhere. The sheer mass deployment scale of PCIe will of course help a lot here – economies of scale still count for a lot – but it will be interesting to see where things stand in a few years once PCIe 6.0 is in the middle of ramping up.

Thus far, PAM4 signaling has only been used for networking and expansion buses, so using it for a memory bus, though a logical extension, would represent a big leap in technology. Now Micron has to develop memory that can not only do clean PAM4 modulation – which is not a simple task – but NVIDIA needs a matching memory controller on the other end. It’s doable, and probably inevitable, but it’s a big change from how memory buses have traditionally operated – even high-speed buses like those used for GDDR.

According to Micron’s brief, they’re expecting to get GDDR6X to 21Gbps/pin, at least to start with. This is a far cry from doubling GDDR6’s existing 16Gbps/pin rate, but it’s also a data rate that would be grounded in the limitations of PAM4 and DRAM. PAM4 itself is easier to achieve than binary coding at the same total data rate, but having to accurately determine four states instead of two is conversely a harder task. So a smaller jump isn’t too surprising.

Meanwhile it leaves the core DRAM frequency as a lingering question. As a refresher, DRAM cells more or less flatlined in performance years ago – you can only drive a mixed transistor/capacitor device so quickly – so newer memory technologies have been about ever-greater parallelism. In the case of GDDR technologies, for example, this means that 16Gbps GDDR6 has the same core clock rate as 8Gbps GDDR5. So to achieve a 21Gbps data rate, it’s not clear if Micron is pushing the core DRAM clockspeed higher, or if they’re dividing it again and relying on more parallelism (e.g. a larger prefretch size). Given what late-generation GDDR5 memory was capable of, I suspect Micron is just pumping the core clockspeed hard for GDDR6X, but one way or another it will be interesting to see what they do.

The other major wildcard for the moment is going to be costs. As I mentioned earlier, PAM4 has been around for quite a while; it’s just expensive to use due to the engineering and silicon required. How much will adding PAM4 to a memory chip add to its cost? Clearly this is going to be a premium memory technology, though at the same time it’s a safe bet that Micron wouldn’t be going this route if it was going to cost as much as HBM, which has already become cost-prohibitive for consumer video cards.

Moving on, there’s one final interesting nugget of information on GDDR6X in Micron’s whitepaper, and that’s on power consumption. One of the indirect benefits of PAM4 is that by running a bus at a lower clockrate than would otherwise be required, the power consumption requirements go down. It’s by no means a 2x difference, as PAM4 coding’s complexity eats up power in other ways, but it’s more efficient none the less. And according to Micron, this is going to play out for GDDR6X as well, with GDDR6X having a slightly lower energy cost per bit. 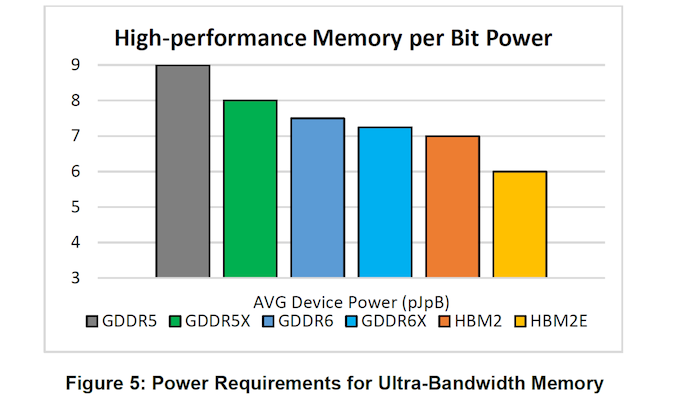 According to Micron’s brief, we’re looking at an average device power of roughly 7.25 picojoules per byte for GDDR6X, versus 7.5 for GDDR6. Going by this data, this is also relatively close in power efficiency to HBM2, though well behind HBM2E. That said, as this is efficiency per byte, it means that actual power consumption is a function of bandwidth; and while GDDR6X is a little more efficient, it’s slated to be a lot faster. So going by Micron’s data, the total power consumption of GDDR6X is going to be higher than GDDR6, by about 25%.

Overall, Micron presents PAM4 as the natural evolution of GDDR memory technology. And while this is wrapped up in obvious technical marketing, there is a nugget of truth, in as much as the official data rates for GDDR6 still top out at 16Gbps. Rambus, for its part, has demonstrated 18Gbps GDDR6 in the labs, but from the outside looking in, it’s not clear right now if that is commercially viable – no memory vendor currently has 18Gbps chips in its catalog.

But regardless of where vanilla GDDR6 eventually tops out at, the memory industry as a larger whole has long been staring down a reckoning with memory bus speeds. Successive standards have employed various techniques to improve data rates, such as GDDR6’s QDR, but GDDR has always remained a single-ended I/O standard using binary coding. With transfer rates per pin now over 16GT/second, one of those two core principles will eventually have to change, as we’ve seen in other fields employing high-speed I/O. 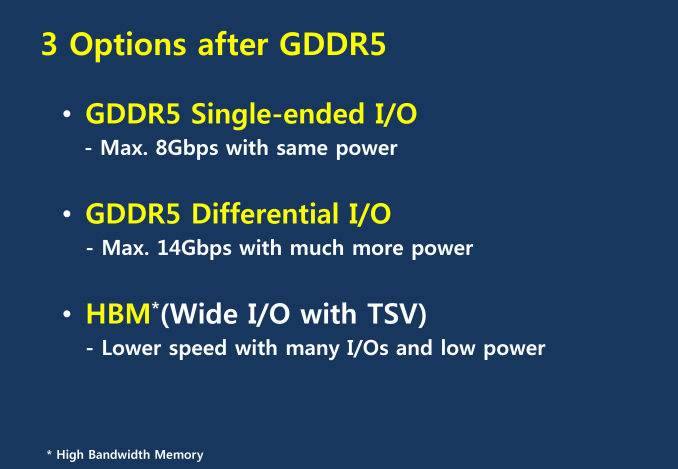 PAM4, in turn, is likely to be the lesser of two evils. Throwing out binary coding for PAM4 is, if nothing else, the more energy efficient option. The other route would have been to throw out single-ended I/O for differential signaling, which is something the memory industry is keen to avoid. Differential signaling works, and it works well – GDDR6 even uses it for clocking (and not memory transfers) – but it consumes a lot of pins and even more power. Which is part of the reason that HBM came around. So in one respect PAM4 can be thought as another way to stave off differential signaling on GDDR for at least another generation.

Finally, and while we’re on the subject of memory standards, the conspicuous absence of JEDEC in Micron’s document bears mentioning. The trade organization and standards body is responsible for setting GDDR memory standards, including GDDR6 as well as Micron’s previous attempt at a memory technology offshoot, GDDR5X. Given the premature nature of the brief’s release, it’s not clear whether GDDR6X is another JEDEC standard that is currently being developed privately ahead of a public launch, or if Micron is truly going solo and has developed its own memory standard.

Last, but not least, let’s talk about the second secret spilled in Micron’s brief, NVIDIA’s GeForce RTX 3090. The presumably high-end video card is apparently Micron’s flagship use case for GDDR6X, and the company has helpfully laid out its typical memory configuration.

In short, according to Micron the video card will ship with 12GB of GDDR6X in a 384-bit memory bus configuration. That memory, in turn, will be clocked at somewhere between 19Gbps and 21Gbps, which at the higher- end of that range would give the card 1008GB/sec of memory bandwidth, just shy of a true 1TB/sec (1024GB/sec) of bandwidth.

Compared to NVIDIA’s current-generation GeForce cards, this would be a sizable step up in memory bandwidth. At a minimum we’re looking at 36% more bandwidth than a GeForce RTX 2080 Ti, and at the high-end of that estimate that figure becomes a full 50% jump in bandwidth. This is still well below what NVIDIA’s Ampere-based A100-accelerator can do (1.6TB/sec), but it would be phenomenal for a card using GDDR-type memory on a 384-bit bus. And it goes without saying that it would go a long way towards helping feed the beast that is a next-generation high-end video card.

At any rate, this is clearly far from the final word for GDDR6X or NVIDIA’s RTX 3090, so we’ll have more to look forward to as NVIDIA’s September event approaches.