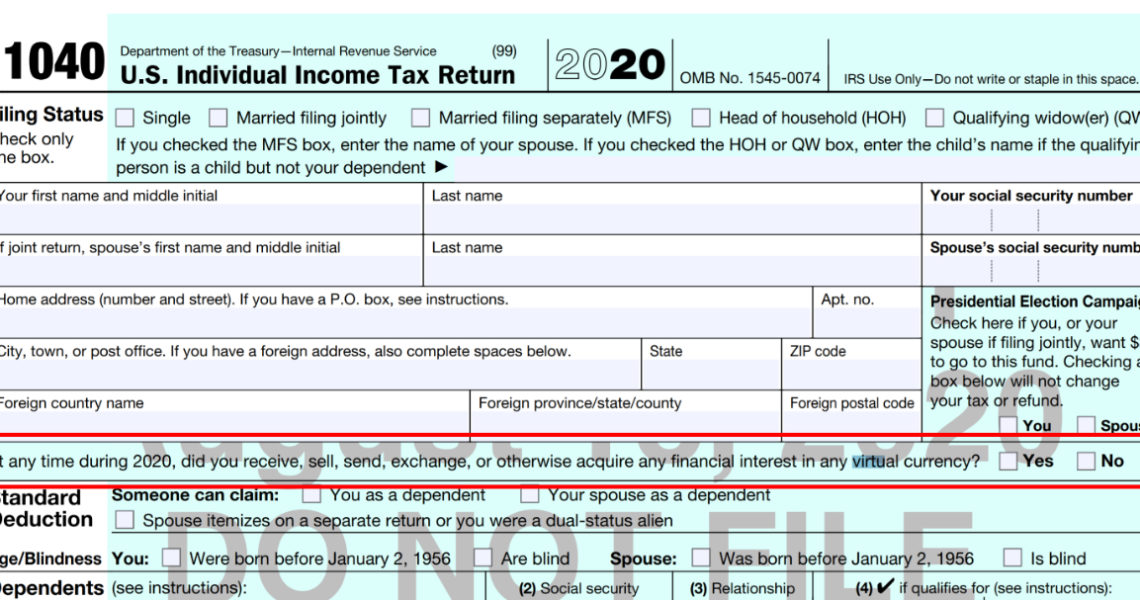 The new U.S. tax form is out and the cryptocurrency question is the first one on the main 1040 tax form used by about 150 million people to file their taxes. The Internal Revenue Service (IRS) requires all tax filers to declare whether they have received, sold, exchanged, or acquired any cryptocurrencies.

The IRS has published a draft tax form for the 2020 filing. The question about cryptocurrency is now the very first one on Form 1040, the main tax form used by individual U.S. tax filers. Every year, about 150 million people use this form to file their taxes.

The question reads: “At any time during 2020, did you receive, sell, send, exchange, or otherwise acquire any financial interest in any virtual currency?” It only requires a yes or no answer.

The IRS began including the cryptocurrency question in its tax form last year. However, the question was previously on Schedule 1, the form used for declaring “Additional Income and Adjustments to Income.” Some tax experts believe that the agency’s crypto question is unconstitutional.

Twitter user Justin Winston Ono Wales, who said he is a crypto lawyer, believes that the IRS’ question “is way too broad and should be challenged.” He explained: “If you get paid in crypto, you must declare it as wages. If you realized gains from a crypto investment, you must declare it as a cap gain. But constitutionally, the gov should not know whether you purchased, received, or acquired crypto because crypto is not just money … public chains like Bitcoin requires a native currency (BTC) to access its network. BTC is sound money, but also much more,” adding:

The updated IRS form doesn’t ask you to list your crypto holdings (yet), but to declare if you received or sold crypto within the year no matter the reason. This information is beyond the purview of information the IRS needs to do its job.

The IRS has made no secret of attempting to collect more taxes from cryptocurrency owners. Last year, it sent out about 10,000 letters to people it suspected of owing crypto-related taxes reminding them to pay. However, the Taxpayer Advocate Service, an independent organization within the IRS, says the letters violated taxpayers’ rights.

The IRS issued new cryptocurrency tax guidance in October last year to update the one published in 2014. At the end of June, the agency requested information about privacy coins and technologies that obfuscate crypto transactions. The following month, bitcoin investor Jim Harper filed a lawsuit against IRS Commissioner Charles P. Rettig and a number of agents for unlawful seizure of financial records from crypto exchanges.

What do you think about the IRS prioritizing the crypto question? Let us know in the comments section below.