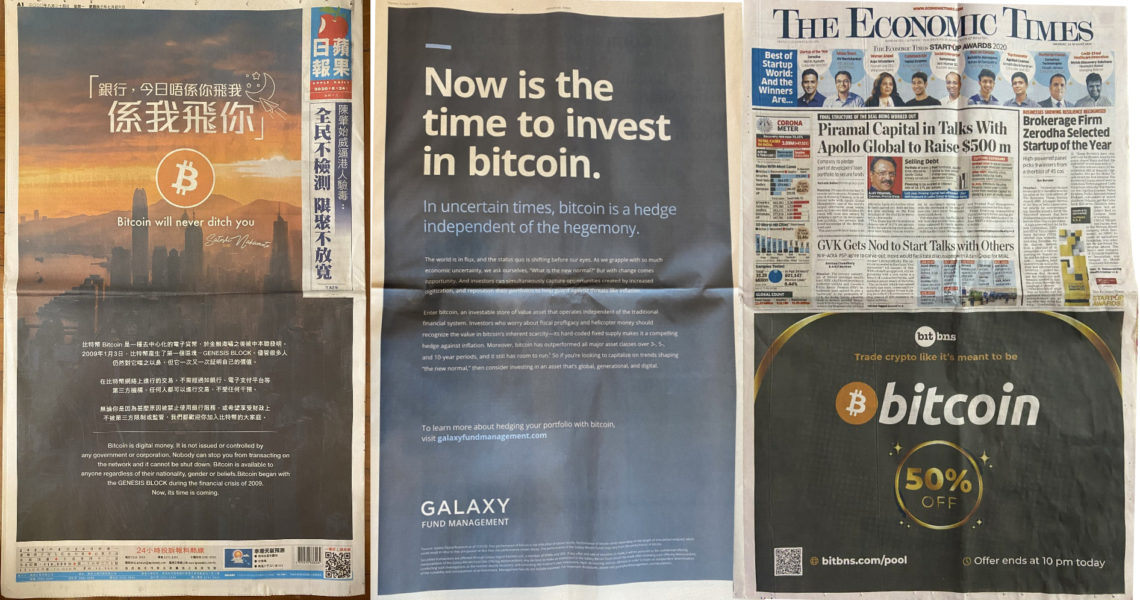 The number of bitcoin ads appearing in major newspapers is growing. The front page of Apple Daily, a major newspaper in Hong Kong, featured a “Bitcoin will never ditch you” ad this week. Bitcoin ads also recently appeared in leading Indian newspaper The Economic Times, the Financial Times, as well as on TV.

Bitcoin appeared on the entire front page of the Apple Daily newspaper in Hong Kong on Monday. Apple Daily was founded in 1995 by media tycoon Jimmy Lai, who was arrested on Aug. 10 by the Hong Kong police on charges of violating the new controversial national security law imposed by Beijing. A Reuters Institute poll conducted last year shows that Apple Daily and its news website were the second-most used in Hong Kong. Lai also founded popular Asian clothing retailer Giordano and Hong Kong-listed media company Next Digital.

Apple Daily’s bitcoin ad is partly in Chinese and English. The first English sentence featured across the top section of the front page reads, “Bitcoin will never ditch you,” accompanied by an artistic signature representation of Satoshi Nakamoto, the pseudonym of Bitcoin’s creator. Hong Kong-based journalist Aaron Mc Nicholas translated the first Chinese sentence, which states:

Banks, it’s not you ditching me today. It’s me ditching you.

The ad continues in English at the bottom of the page. It says: “Bitcoin is digital money. It is not issued or controlled by any government or cooperation. Nobody can stop you from transacting on the network and it cannot be shut down. Bitcoin is available to anyone regardless of their nationality, gender or beliefs. Bitcoin began with the genesis block during the financial crisis of 2009. Now its time is coming.” Many people on social media view this ad as extremely bullish for bitcoin.

One Reddit user described Apple Daily as “one of the few Cantonese language, independent news sources remaining in Hong Kong,” adding that “They’re somewhat in the centre of this political storm, that includes recent sanctions on 11 government officials by the US. So it’s a very deliberate placement.” Several other users agreed.

Michael Novogratz’s Galaxy Digital placed a full-page ad in the Financial Times on Aug. 13 with a bolded headline that reads: “Now is the time to invest in bitcoin. In uncertain times, bitcoin is a hedge independent of the hegemony.”

All three ads followed a bitcoin TV campaign by Grayscale Investments that kicked off on Aug. 10 on CNBC, MSNBC, FOX, and FOX Business. Within less than a week of the campaign launch, the company announced that it raked in record weekly investments of $217 million.

What do you think about bitcoin ads in major newspapers? Let us know in the comments section below.