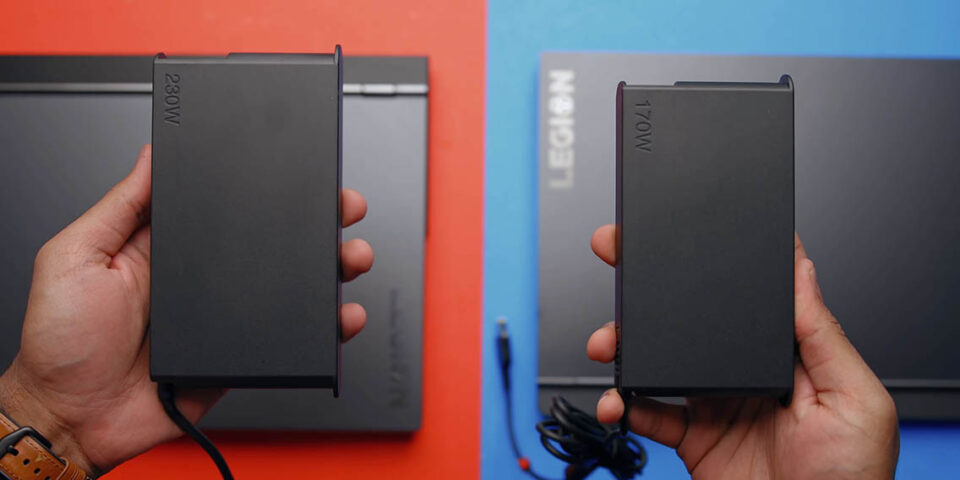 Meet the Legion Slim 7i. Now you might have already read our Legion 7i review, which was already a pretty compact 15-inch gaming notebook, but the Slim 7i takes that compact approach to the next level by shaving off some weight and some height without compromising too much on specs.

I also want to share my story behind this notebook, because a few years ago I actually got a chance to check out an early concept design of this notebook at Lenovo’s headquarters in North Carolina. Basically Legion wanted us to give them all sorts of feedback, not just from us but from the gaming community as well, about what we are looking for in a gaming notebook. Now they have now finally sent an early pre-production sample, and they are sponsoring this video so that we can get an early hands-on look at what they have done with all that feedback. While we will still have to wait for the final retail sample to do a complete performance analysis, I can already say that a lot of the feedback that we talked about in North Carolina has been implemented in the Slim 7i.

A lot of the concept behind this gaming laptop comes from the Y740Si, which we didn’t see here in North America and its goal was a bit unique. Basically, it offered high-end CPU processing horsepower in an ultra-portable form factor, but it didn’t come with a discrete graphics card. If you wanted to game it needed to be hooked up to an external GPU dock. The Slim 7i on the other hand aims to be the best of both worlds. It is still super slim and portable, but it can include an NVIDIA RTX GPU. They have also improved a few other things from the Y740Si. Think of it as a standard Legion 7i gaming laptop, but one that has been put on a very strict diet.

The first thing that I want to talk about is the target audience for the Slim 7i, because if you think about it the standard 7i was geared towards gamers who wanted a no compromise desktop replacement that could deliver the fastest performance while also being portable when you absolutely needed it. The Slim 7i on the other hand is for more mobile gamers who want the ultimate blend of portability and performance mixed into one device. There are also some other features that are catered specifically towards creators. In a lot of ways there is going to be overlap between the original 7i and Slim 7i. Either devices completely suitable for its market, but Legion is not giving you a choice between the two.

That being said, the 7i’s high-end performance did come with some trade offs. It was still pretty lean for a gaming notebook, but it weighed in around 4.6 lbs / 2.1 kg. The Slim 7i revolves around the portability aspect because it weighs less than 4 lbs / 1.8 kg, and it’s only 17.9mm thick versus 20mm on the 7i. This is tied for the slimmest gaming laptop we have looked at, but it’s certainly the lightest. I was instantly able to tell the size and the weight difference between both of these notebooks. The other cool thing is that you don’t sacrifice a ton of performance with Slim 7i, both gamers and creators can comfortably use this machine and also be able to comfortably lug it around as well.

The progress that has been made in just the last few years is pretty impressive. Legion and other companies have gone from laptops that were over 30mm thick to devices that are now under 20mm. From a physical perspective I really like the looks of the Slim 7i. The first thing that I noticed is the color consistency across the chassis, the top, the edge, and the bottom panel all come in this slate grey finish instead of the black and grey mix on the 7i. It ended up looking a lot more stealth and something that you can easily rock in a coffee shop or a classroom setting.

Taking a look at the I/O, on the left-hand side there is an audio jack, a full-size UHS-1 SD card reader. On the right-hand side you will find two Thunderbolt 3 ports, and on the rear side you will find a couple of USB 3.2 Gen2 ports and a power-in jack. With the Slim 7i you are losing a few dedicated display outputs, a few USB ports, and an RJ45 jack compared to the original 7i, but that is to be expected for its form factor.

The power adapter is also slimmer than the standard 7i, but keep in mind that some models do need a bigger one because of the hardware packed in. The minimum is 170W, which comes with the lower-end SKUs, and the largest is 230W, which looks similar to the 7i’s unit.

The interior space for the most part is clean and pretty fingerprint resistant too. There is full glass trackpad with support for Windows Precision drivers. The power button acts as a fingerprint reader, so that’s pretty cool. The keyboard is something that I want to quickly bring up too, because it’s definitely one of those factors that I brought up to Legion during the feedback process when I was back in North Carolina. Basically I told that their ThinkPad notebooks have some of the best keyboards on the market period, so why not bring some of that tech into your gaming notebooks? The result is the TrueStrike Keyboard, which was first used on the Legion 7i and 5i, and it’s making an appearance here again. These switches have 1.3 millimeters of travel and are soft landing, but they also have a really nice tactile feel.

Moving on to specs, the base config comes with Intel’s 10th gen Core i5-10300H, 8GB of RAM, a 512GB NVMe SSD, a GTX 1650 Ti, a 1080P 300-nit display, and all of that will cost you $1,350 USD. The top-tier spec comes with a Core i9-10980HK 8-core/16-thread CPU, 32GB of RAM, 2TB NVMe SSD, an RTX 2060 Max-Q, Windows 10 Pro, and the option to choose either a 4K colour accurate screen with 600-nits or the standard 1080P 144Hz 300-nit display. Like I said earlier, this is geared towards either content creators or gamers, or maybe even both. That is actually not too bad for the world’s lightest 15.4-inch gaming laptop with RTX graphics. It’s pretty amazing to see what Lenovo has been able to cram inside this machine. Now I do want to mention that there is a spec overlap between both these notebooks in terms of CPU, memory, storage, and the graphics card. If you want a Core i9 processor you can have it on both notebooks, if you want 32GB of RAM you can have that on both as well, and if you want RAID-0 configurations that is also available. The only exception is the GPU because the regular 7i can be configured up to an RTX 2080 Super Max-Q GPU, whereas the Slim 7i is only limited to an RTX 2060 Max-Q GPU.

As you might expect the battery on the Slim 7i is smaller compared to the original 7i, so you are getting a 3-cell 71Wh unit versus a 4-cell 80Wh unit. Now I can’t do a battery analysis test or tell you how long the battery lasts because this is a preproduction sample, but I will obviously run our full gamut of tests once I receive the full retail unit.

Now given that Legion has packed this notebook with some serious hardware, they didn’t want to compromise on cooling performance. They have added intake vents at the front that directly go towards the CPU and the GPU, which should result in better temperatures and therefore maintain higher clock speeds. Legion has also brought the Coldfront 2.0 cooling system from the 7i to the Slim series, but they have made some modifications to better optimize temperatures. This consists of a copper heatsink with thermal sensor arrays, and thicker fans to optimize airflow. The exhaust vents are positioned appropriately towards the side and the back. It will be really interesting to see what temperatures over time look like, so definitely stay tuned for our full review.

Finally, the Slim 7i also incorporates NVIDIA’s Max-Q Dynamic Boost, which is a really important addition to a thinner gaming design that might have a lower allowable wattage than thicker laptops. Basically, it identifies when the GPU becomes a bottleneck and then shifts power from the CPU in real-time in order to increase in-game performance. Up to 15W of additional overhead can be directed towards the graphics card when it’s needed.

That pretty much concludes this super early hands-on look of the Lenovo Legion Slim 7i. I’m actually really curious to run our full performance analysis and give you our full verdict on this machine. We will hopefully be one of the first to publish that review, so stay tuned!

Check out the Legion Slim 7i Gaming Laptop – http://bit.ly/HWCSlim7i

Buy the original Legion 7i – https://lenovo.vzew.net/04WNE