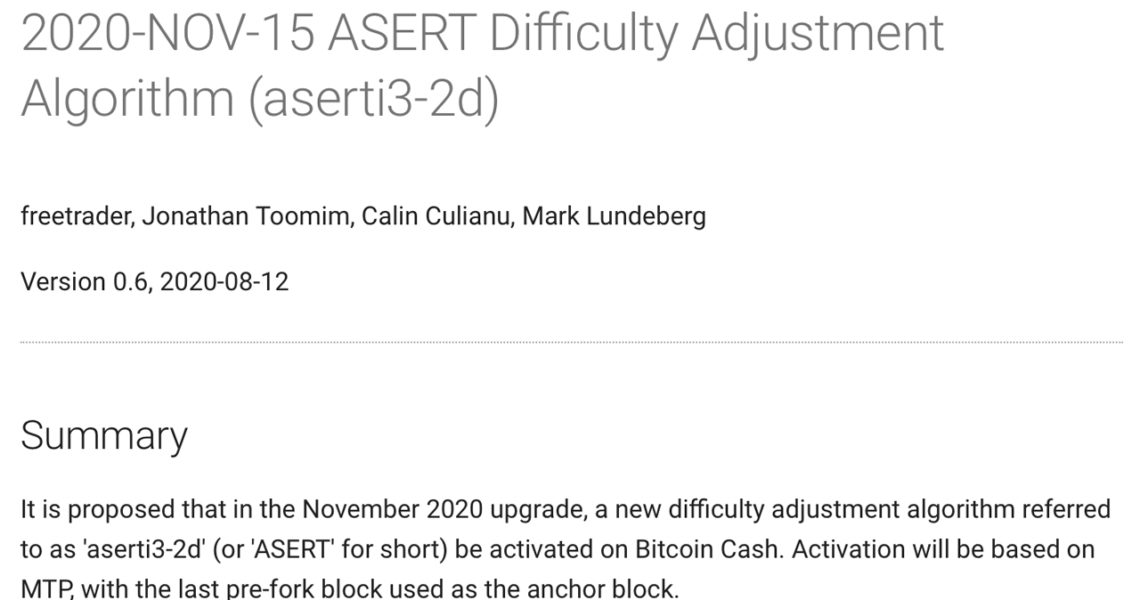 The Bitcoin Cash community has been patiently waiting for weeks for the November 15, 2020 upgrade and the day is finally here. Every six months the Bitcoin Cash network upgrades, but this time around, a conflict sparked over Bitcoin ABC’s Infrastructure Funding Plan (IFP). During the course of the day, the following editorial will be monitoring the Bitcoin Cash upgrade in real-time so our readers can be kept up to date.

The aserti3-2d Github description details that people can get a “high-level description of the motivation and background” for ASERT by reading the programmer Jonathan Toomim’s read.cash article. Specifications for ASERT can be read here on the Bitcoin Cash upgrade specifications web portal.

As usual, Bitcoin Cash supporters watched the upgrade in real-time by leveraging the web portal Coin Dance. The website has maintained a countdown clock for the upgrade, information, and it displays three full node software clients in three separate sections. Additionally, the fork monitor operated by the derivatives exchange Bitmex has also been monitoring the fork.

Because Bitcoin ABC stuck with implementing the IFP, it is expected to produce two incompatible networks. Every full node client, except for ABC’s IFP version, will be agreeing on the same rules. Bitcoin cash (BCH) users should see a smooth transition, but they may see an airdropped coin if miners decide to mine the ABC software that introduces the controversial IFP mechanism.

The live stream crypto show hosted by Collin Enstad will be broadcasting live today on November 15 with Mike Komaransky and the show will be covering the airdrop all day on Youtube with a number of special guests.

News.Bitcoin.com readers can check out prior articles on this subject here, here, here, and this article here. Those editorials not only explain the situation at hand but also wallet and exchange contingency plans. A number of wallets and exchanges plan to support both tokens in the event of a split, while other third-party services have revealed only supporting one side.

During the morning hours before fork activation, the crypto trading exchange Coinex changed the futures market from BCHN and BCHA to BCH and BCHA to represent the split. At the time of publication, spot prices for Bitcoin Cash (BCH) on Coinex are $243 per unit while ABC’s airdrop token is $15.82 per unit. On Poloniex the ABC airdrop is swapping for $14 against USDT pairs, and on Coinflex ABC is trading for $11 per unit.

Software developer Christ Troutner announced the launch of a website that hosts a splitting tool and the alpha web-based tool at splitbch.com will be available after the upgrade is settled. Troutner also published a demo of the splitbch splitting tool on Youtube.