QNAP is a well-known manufacturer of network-attached storage (NAS) units. Recently they have been testing the waters in allied areas such as switches and Wi-Fi expansion cards. As a natural extension, they recently introduced their first standalone Wi-Fi router – the QHora-301W. The consumer market for Wi-Fi routers is a saturated one with multiple established vendors such as Netgear, TP-Link, D-Link etc., and recent entrants such as Google and Amazon (eero) jockeying for market share. QNAP’s strategy in this space is to approach the market from their established consumer base – prosumers and small and medium businesses (SMBs). Helping their first-generation product stand out in the crowd is the inclusion of a headline-grabbing feature – two NBASE-T ports capable of operating at speeds up to 10Gbps. The specifications of the Wi-Fi 6 router are summarized in the table below, followed by an overview of the various hardware features of the unit.

The QHora-301W is based on the Qualcomm IPQ8072A Wi-Fi SoC – a member of the Networking Pro family of products. A block diagram of the family flagship (IPQ8078) WiSoC is reproduced below. 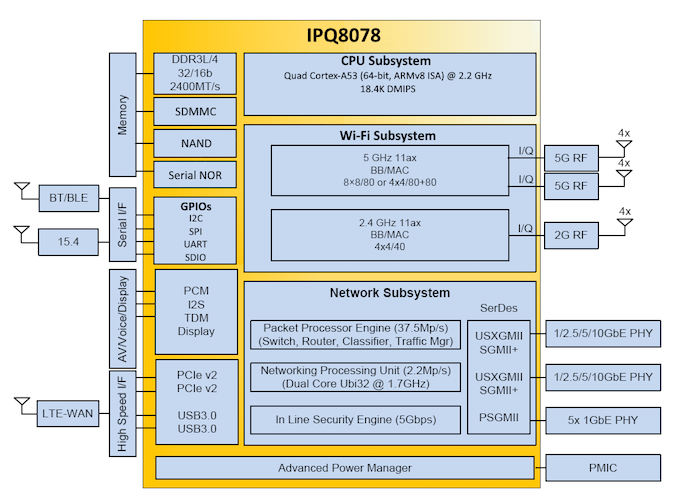 The IPQ8072A WiSoC borrows elements from across the product stack – while the quad-core Cortex-A53 cluster operates at 2.2 GHz, the Wi-Fi subsystem has only two sets of radio chains (instead of the three in the IPQ8078 above) – one 4×4 5GHz, and one 4×4 2.4 GHz. The 5GHz chain operates with 80MHz channels in a 4×4 configuration, but can also operate with 160MHz channels in a 2×2 configuration for 2.4Gbps of peak theoretical throughput. The 2.4GHz chain operates in a 4×4 configuration with 40MHz channels for 1.2Gbps throughput, placing the WiSoC in the AX3700 class. The IPQ8072A also fixes the uplink MU-MIMO feature that was missing in the IPQ8072 WiSoC. In terms of PHY-support, the IPQ8072A and IPQ8078 are equivalent. However, the QHora-301W only takes advantage of four out of the five 1GbE PHY interfaces (PSGMII) available. Unlike existing Wi-Fi 6 routers based on the IPQ8072A, the QHora-301W opts to make use of both USXGMII 10GbE PHY interfaces – They connect to the Marvell Aquantia AQR113C PHY to enable the two NBASE-T ports (supporting up to 10Gbps).

The software-defined WAN feature (SD-WAN) is one of the key selling points of the router to QNAP’s current SMB customers. With its integrated site-to-site VPN solutions, it enables easy configuration of an extension of the office networks to a remote employee’s location. Creating a separate VPN profile for an employee’s mobile device as well as a desktop creates IT headaches – moving that to a single VPN instance in the gateway or router at the remote site makes the job of the IT department relatively simple. The QHora-301W can even scale well enough for such purpose in a remote location with 10 to 20 employees. The dual 10GbE ports can also help with faster remote backups, with the possibility of a high-speed interface each in the upstream and downstream directions.

The QuRouter OS / QuWAN feature supports mesh VPN for multi-site VPN deployments – this prevents overloading of the VPN at the HQ location. At the same time, it also allows for centralized management. QNAP currently advertises these features as subscription-free. The unit can also operate in dual-WAN mode, allowing for WAN failover, load balancing, and aggregation too. The WiSoC’s network processor also enables deep-packet inspection (DPI), and QNAP is promising intelligent QoS as well as L7 firewalling in their firmware roadmap. On the wireless side, the router supports up to six virtual access points (VAPs). VAPs can be configured with different SSIDs, access profiles, and routing policies. This is typically used to implement guest networks in home consumer scenarios – business users can take advantage of this feature to bridge different SSIDs to different VLANs (as an example). These value-additions are complementary to standard router functions such as static routing, protocol-based firewall, NAT, port forwarding, parental controls, AP mode etc. Similar to the QNAP QTS web GUI for its NAS units, the QuRouter OS also has a web GUI that aims to make configuration simple for novice users also. For its SMB (IT administrators) customers, QNAP also has a cloud-hosted management tool (QuWAN Orchestrator) that allows management of multiple QHora-301W units deployed in geographically spread out locations.

On the pricing front, the QNAP QHora-301W has a MSRP of $329, though the current street price is slightly south of $400 (Newegg and Amazon) from third-party sellers. Despite the high-end features, the launch pricing is surprisingly affordable at $329. 10GBASE-T ports are not available in a Wi-Fi 6 router from any other vendor – so there is no direct comparison to make. Vanilla AX4000-class routers come in at around $200, but they sacrifice on RAM (around 512MB soldered) and flash (around 128 to 512MB). They also tend to use the slower low-end products in Qualcomm’s Networking Pro stack. Given its SD-WAN capabilities, QNAP has included 1GB of RAM and 4GB of flash, while equipping the unit with a suitable Qualcomm Networking Pro (IPQ8072A @ 2.2 GHz) WiSoC. This gives it extra resources to fulfil the advertised SD-WAN duties. Some sacrifices are made compared to high-end consumer Wi-Fi routers – the QHora-301W doesn’t have a second 5GHz radio, which restricts it to the AX4000 class. This also prevents optimal usage in mesh networking scenarios, which can make use of a dedicated wireless band for inter-node communication. However, the BOM cost reduced by avoiding a second 5GHz radio is compensated by the addition of two 10GBASE-T (NBASE-T) ports. Interestingly, despite the increase in power consumption due to the 10GBASE-T ports, QNAP has created a fanless design for the unit and promises throughput maintenance as long as the operating temperature is between 0-40C. Many Qualcomm customers have created the typical dual 5GHz radio wireless router with a dedicated channel for mesh nodes communication, or even as a separate Wi-Fi SSID occupying a distinct radio channel. But, QNAP has played the trade-offs well to avoid creating a me-too product. The QHora-301W’s specifications make it an affordable Wi-Fi 6 router with unique capabilities catering specifically to QNAP’s existing consumer base.

If one is looking for a Wi-Fi router with all the bells and whistles that established vendors already include in their units – such as geoblocking and mesh networking support, the QHora-301W is not the solution to buy. The incumbents have included such value-additions over the course of multiple generations, and QNAP will probably take at least a couple of generations to get their firmware to feature parity in the consumer space. In that context, it is relevant to note that the software-defined WAN moniker points to inclusion of features that might appeal to the SMB space – again, a few firmware updates might be needed to fulfil all the advertised features. Given that antenna placement and tuning affects wireless performance greatly in Wi-Fi routers, the all-internal antenna design of the QHora-301W is definitely an aspect worthy of further investigation.

The SMB / prosumer market segment in QNAP’s target pricing bracket is serviced by vendors such as Ubiquiti Networks (UniFi stack), Mikrotik, Engenius, and the SMB arms of players like Netgear. However, these companies tend to separate out the routing gateway / firewall from the Wi-Fi component (access point) while adding various switches to their product lines. This allows their customers to upgrade the network components separately. QNAP’s strategy of introducing an all-in-one product (with hardware and I/Os similar to the ones found in mid-range and higher consumer Wi-Fi routers) makes it an interesting play for extending the SMB network into the homes of remote workers. However, it eventually needs to be followed up with separate products for each networking segment if they aim to be a serious player in this space.