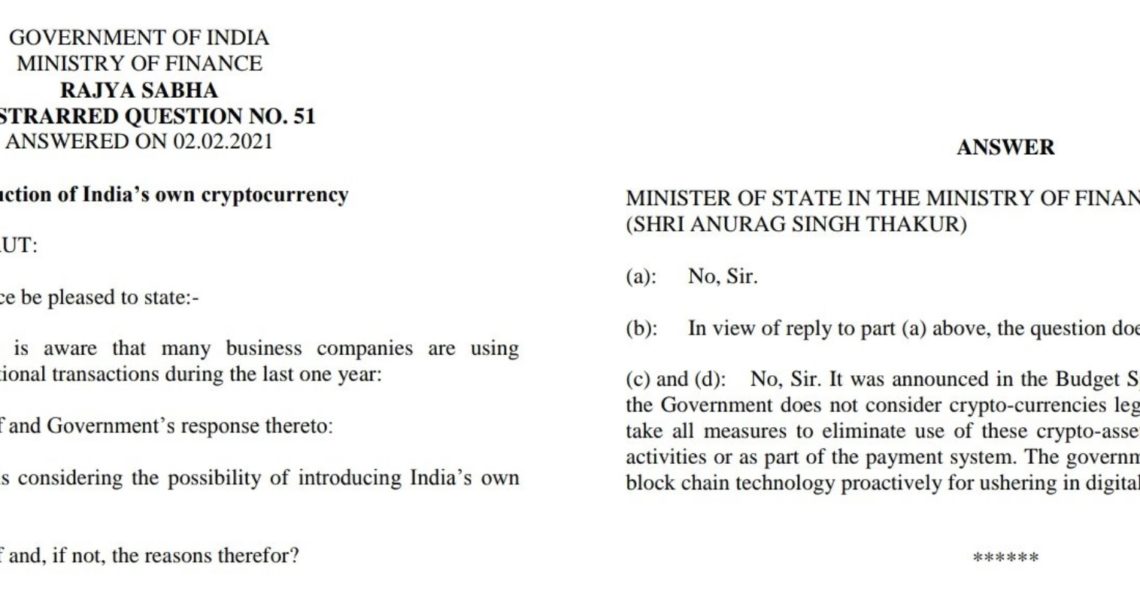 The Indian government has clarified its position on cryptocurrency and the country’s digital currency in answers provided by the Ministry of Finance in Rajya Sabha, the upper house of India’s parliament. The Indian crypto industry sees this clarification as positive news and that the government is unlikely to impose an outright ban on cryptocurrencies, including bitcoin.

Rajya Sabha, the upper house of India’s parliament, published a list of questions and written answers on Feb. 2 that include the topic entitled the “Introduction of India’s own cryptocurrency.”

The questions were answered by Minister of State for Finance Anurag Singh Thakur. He replied “No, Sir” to the first question.

To the question about the digital rupee, he replied: “No, Sir. It was announced in the Budget Speech of year 2018-19 that the government does not consider crypto-currencies legal tender or coins and will take all measures to eliminate use of these crypto-assets in financing illegitimate activities or as part of the payment system. The government will explore use of the blockchain technology proactively for ushering in digital economy.”

The questions and answers published by Rajya Sabha followed the listing of the cryptocurrency bill to be introduced in the Budget session in Lok Sabha, the lower house of India’s parliament.

According to Lok Sabha’s booklet, the crypto bill seeks to create a regulatory framework for the issuance of the digital rupee by the Reserve Bank of India (RBI) and ban “private cryptocurrencies.” The RBI also recently revealed that it is exploring the need to issue a central bank digital currency (CBDC).

Commenting on the Minister of State for Finance’s answers, the CEO of local crypto exchange Wazirx, Nischal Shetty, said that the answers by Shri Anurag Thakur “goes to show that government is focused on curbing illegal activities & payment systems.” He elaborated:

This clears more confusion that there won’t be a complete ban on crypto.

Shetty previously said: “I do not believe there will be a complete ban on crypto in India. Most importantly, no government anywhere in the world will destroy Rs. 7,500+ crore worth of assets belonging to 7 million people.”

The CEO of Unocoin crypto exchange, Sathvik Vishwanath, opined: “While this does not indicate the future of crypto industry in India, this is evidence that it is moving in a direction favorable to crypto.”

It is too early to comment on what exactly the term ‘private cryptocurrency’ refers to as per the draft. Further, understanding that cryptocurrency is a global and decentralized system, there is no way any government can ban it.

“That would require that kind of technology and control, which technically does not rest with anyone. They can certainly ban the legitimate use of crypto which will only make it difficult for a common person who does not understand it to get involved in it,” he added.

“However, what we understand is that the Indian government is trying to crack down on scams that are running in the name of bitcoin, considering that 90 percent of these scams do not even operate on a proper cryptocurrency,” he further opined. “We are positive that the government will come up with regulations and policies that will put control on the scams and let the innovation in the industry, including the crypto like bitcoin, cashaa, ethereum that are built on the public chain to grow and thrive.”

Do you think the Indian government will ban bitcoin? Let us know in the comments section below.