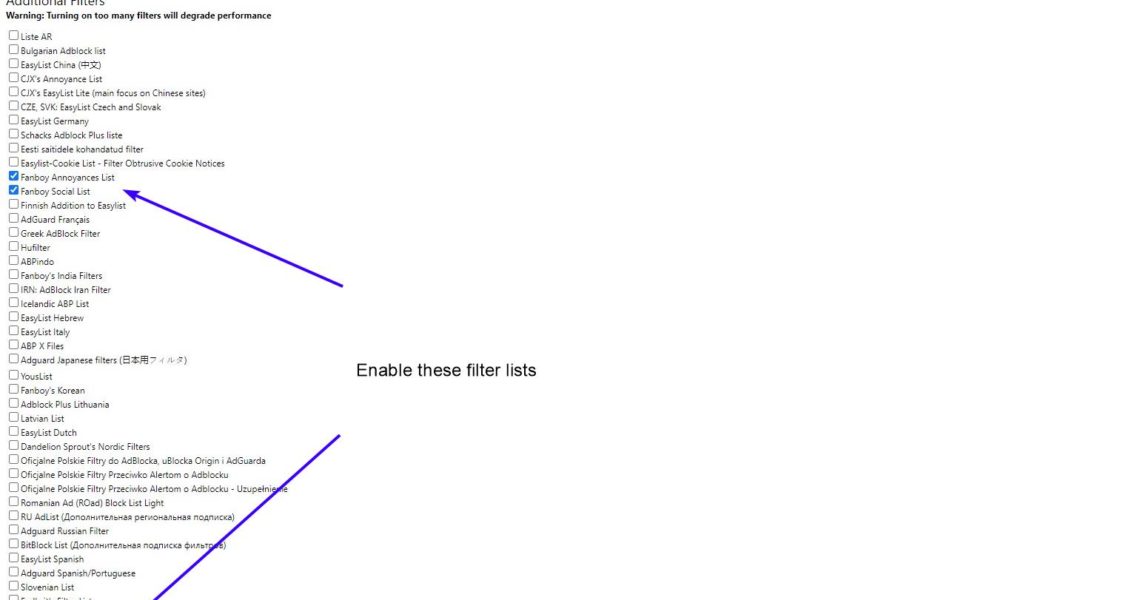 What are these filters anyway? Do I need them? As you may know, ad-blocking extensions and Brave Shield disable advertisements, banners, and other forms of ads. But most websites have additional elements on their website such as social sharing buttons such as Facebook, Twitter, or other elements that users may find annoying.

The new filter lists block the tracking functionality of these elements (they’re visually removed too), and also removes pop-up stuff like subscribe or welcome banners.. Yes, those social share buttons actually track your visits, even if you never use them. If the buttons are available on the page, it acts as a tracker and sends the information to their parent site, that’s how Facebook Pixel works.

Tired of those “we use these cookies” notices? Some sites employ anti-adblock features, these annoyance lists ensures that these get blocked as well.

Since Chromium-based browsers lack the power of Firefox containers, which in my opinion offers better privacy, these annoyance lists are welcome additions for Brave browser users who want to prevent social-networks from tracking you.

That’s great, but these new options are not enabled in the Brave Shield by default. That’s probably because not everyone may want to use them.

To activate the new filter lists, head to the following page.

The settings aren’t listed in alphabetical order, so you may have to search for them manually. The uBlock Annoyances list appears at the end of the list for me, wile the Fanboy Annoyances List and Fanboy Social List are located in the top half of the list.

Check the box next to the option that you want to use, and you’re good to go. I wouldn’t recommend enabling all the options available on that page, since it could result in heavy resource usage and also prevent websites from loading correctly. So, you should only enable the ones you actually need.

Technically, if you were using uBlock Origin specifically for these lists, you no longer need the extension. But the add-on does more than that and supports custom lists, filters, and elements, so you may want to keep it anyway. That’s what I would do.

Tip: Firefox, Edge (and other Chromium-based browsers) users can enable these annoyance lists from uBlock Origin’s dashboard > filter lists. You don’t have to do this since the add-on does a great job out of the box, but the options are there if you want to enable them.

An issue filed on Brave’s GitHub regarding support for the new filter lists was fulfilled in early December. This reddit thread says that the lists appeared in Brave Nightly 1.20.19, but according to a new post these options were added to the stable release channel in version 1.19.92.

If you don’t have the new ad-blocking filter lists in your browser, check whether you have the latest version. Hey, I still see the social buttons on a website. Make sure that Brave Shield is enabled for the site, click on the icon next to the address bar, and also check if the first drop-down menu says “Trackers and ads blocked” (and not set to “Allow all trackers and ads”).