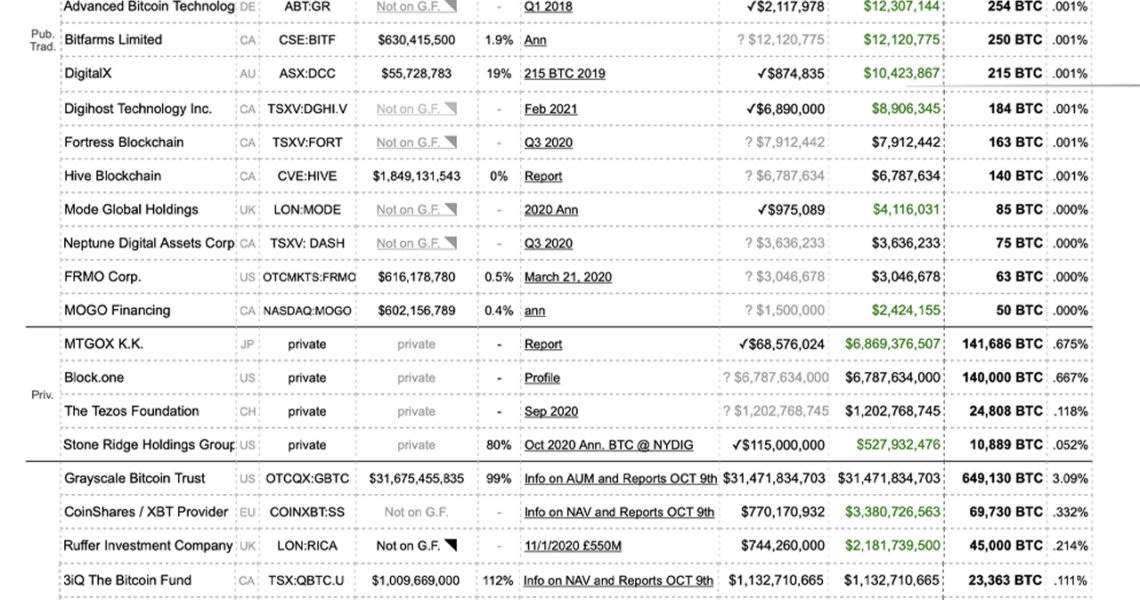 Since the company Microstrategy shifted a lot of its treasury reserves into bitcoin, a great number of companies have followed the firm’s lead. According to the web portal, bitcointreasuries.org, data shows that 42 companies are now represented on the list and the businesses hold more than $65 billion worth of bitcoin.

The Corporate Bitcoin Stash- 6.43% out of the 21 Million Capped Supply

It has become a trend to add bitcoin (BTC) to a company’s balance sheet and the company Microstrategy invoked the trend when the business purchased $250 million worth of BTC. Since then, a great number of companies have followed suit and BTC’s value has skyrocketed as well.

Today, according to bitcointreasuries.org statistics the numbers have changed a great deal. There’s now 42 companies listed on the web portal showcasing firms from all around the world that hold BTC treasuries.

According to the data on March 1, 2021, the companies own $65 billion in aggregated value using BTC/USD exchange values on Monday afternoon (EST). The companies hold a massive 1,350,073 BTC or 6.43% out of the 21 million maximum supply. Since adding 13 more businesses to bitcointreasuries.org’s list, there are a number of new entrants.

Companies, trusts, and hedge funds like Tesla, Inc., MOGO Financing, Osprey Bitcoin Trust, Evolve Bitcoin ETF, Ninepoint Bitcoin Trust, and more have been added to the list. Of course, the biggest holder on the list is Grayscale with 649,130 BTC or 3.09% of the 21 million supply cap. In fact, Grayscale’s massive BTC hoard is close to half of the entire bitcointreasuries.org’s aggregate count of bitcoin balance sheets.

Microstrategy is the fourth-largest holder listed and steadily working toward the six-digit bitcoin holdings with 90,859 BTC under management today. The intelligence firm recently announced buying up $15 million in BTC this past week.

Furthermore, there are numerous companies that are not included on the bitcointreasuries.org website including the Mediterranean restaurant chain Tahini’s, the Canadian graphics software company Snappa, the cannabis firm Synbiotic SE, and even Coinbase.

On February 24, the San Francisco exchange Coinbase explained how it can help corporate strategies obtain bitcoin for their treasury positions. The blog post also mentioned that Coinbase has held BTC on its balance sheets since 2012.

It is likely that many cryptocurrency-centric businesses have adopted this model long ago, and have held BTC and other digital assets in their treasuries for quite some time.