Of the various pin-a-window programs that I have reviewed, I found WindowTop to have the most practical approach. The mini toolbar (floating panel) made it easy to toggle the sticky behavior in any window.

The application was updated to version 5.0 recently. Let’s find out what’s new in it.

WindowTop has been rewritten completely, it’s no longer an AutoIt application. Technically, this change was made with version 4 which was released last year, the one I reviewed was 3.x. Anyway, WindowTop 5.0 is written in C#. The program’s GitHub page mentions that the decision to switch was made after antivirus programs incorrectly flagging the program as malware, just because it was coded in AutoIt. 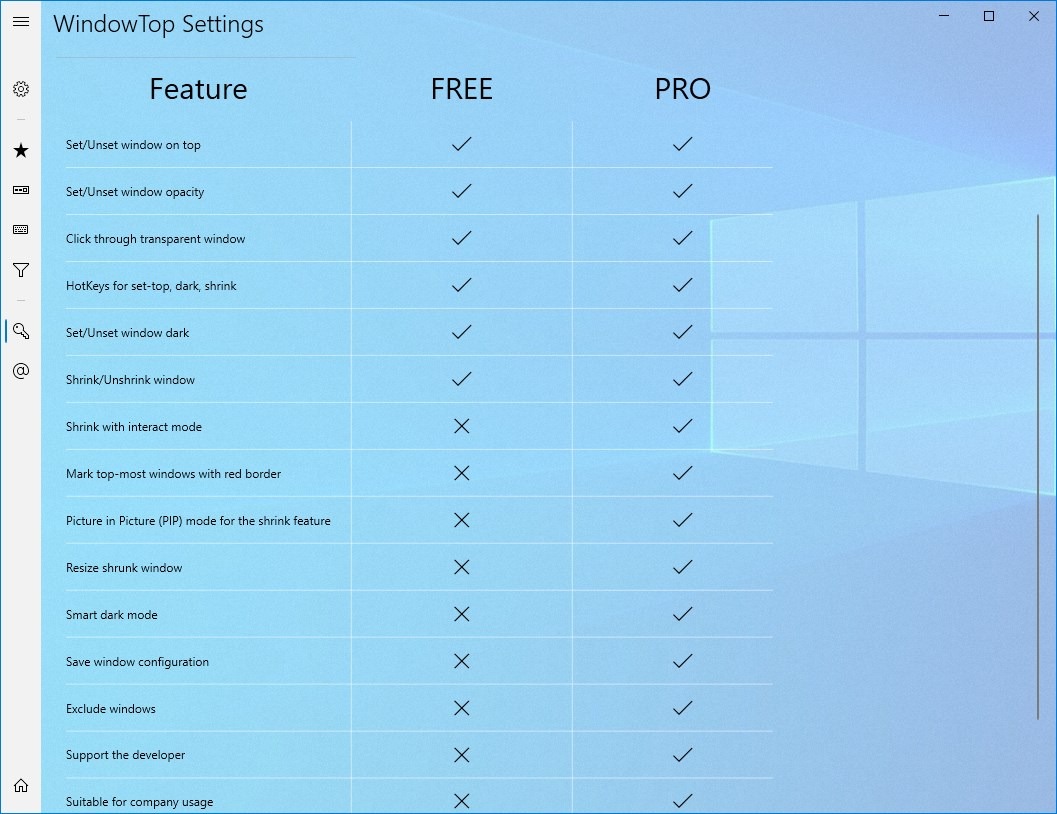 When you run WindowTop, it will display a comparison of the free vs premium features, and offer a 30-day trial of the latter.  You can dismiss the screen, and stick with the free version. The Pro version supports several features that the free version does not support, including options to save window configurations, exclude windows, option to resize shrunk windows, and the shrink with interact mode feature.

Switch to any window and mouse over its title bar, and a small arrow button appears. Mouse over it and a pop-up panel appears, just like in the older version. The buttons in the panel have been rearranged, in order from left to right they are: Shrink, Set Dark, Set Top and Opacity.

This is what the tray menu looked like earlier. 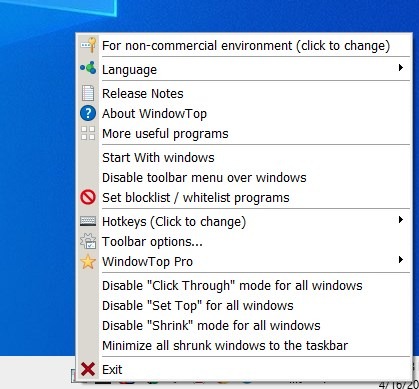 WindowTop 5’s tray menu has been redesigned, instead of a single page with all the settings, it now has a more modern one. It has shortcuts to unstick, unshrink, and maximize all windows. Shrunken windows can be minimized too. The options to disable the toolbar, blacklist and whitelist windows, are now available from a sub-menu. 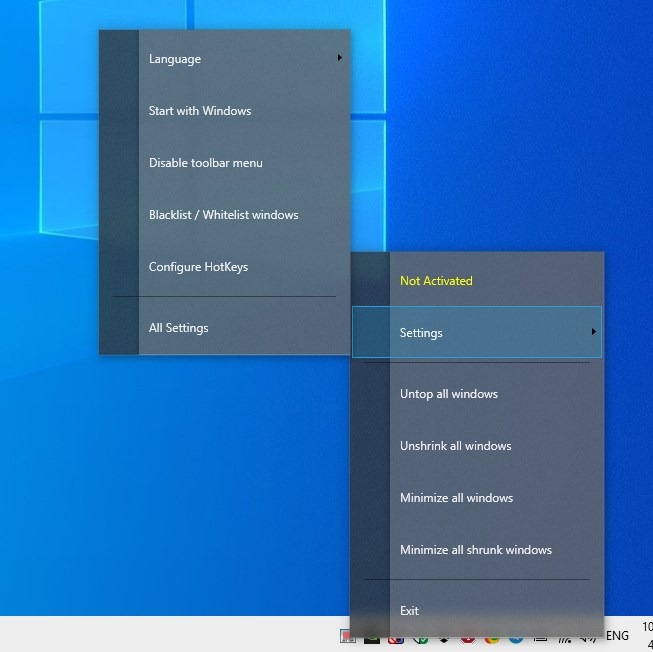 Don’t find one of the 4 buttons of the pop-up panel useful? Go to the 2nd tab in the Settings screen and toggle the ones you don’t like.

There are a ton of hotkeys in WindowTop 5.0 compared to the older versions. You can view the list of supported shortcuts from the Settings page. Speaking of which, the Settings screen has a design that seems to adhere to the UWP standard. The keyboard shortcuts can be customized per your requirements, some of them aren’t enabled, so you’ll need to set them up if you want to use the action.

Here are the ones that are pre-enabled, Alt + Z sets a window on top, Alt + A adjusts the transparency. To shrink a window use Alt + Q, toggle dark mode with Alt + W. WindowTop will display a notification in the Action Center, when you use one of the tray menu shortcuts to manage your windows. The Settings page is transparent, and I had a bit of difficulty using it, but it was a bit easier to use after pinning it.

WindowTop is available in a portable archive. I liked the tray menu design of the old version, it was to the point, the new one looks too big though it does look a lot cleaner. The overall performance of WindowTop was a lot smoother and fluid compared to the older one, but this could be a placebo effect caused by the animations in the new menu. None of the essential options are behind a paywall, and the features of the previous free version have been retained in the new version as well. The file size has increased from just over 2MB to about 5MB, which is still pretty good.  The only problem that I had with it was with the Exit option, which seems to take quite a few seconds to close the program.

We take another look at WindowTop, as version 5 introduces a new interface, more options and keyboard shortcuts.