Today we’re hearing news from ZTE, as the company is announcing the global upcoming launch and availability of the new Axon 30 Ultra. The device had actually been unveiled back on April 15th, but today actually represents the disclosure global availability information and pricing of the device.

ZTE’s actually a relatively larger player in the mobile market, although it doesn’t get as much media attention as other vendors. What sets ZTE apart from other Chinese vendors is the fact that the company is well established in the US and officially releases and supports phones for US carriers, putting them in a rather unique situation in the North American market and why the Axon 30 Ultra is a quite interesting device.

The phone is powered by a Snapdragon 888 SoC which is par of the course for a 2021 flagship phone. The company pairs it with either 8 or 12GB of LPDDR5 RAM and either 128 or 256GB of UFS 3.1 storage. There’s no expandable storage but the phone support dual nanoSIMs.

The display of the Axon 30 Ultra is interesting as it’s a 6.67” AMOLED with a resolution of 2400 x 1080 – so far that’s not anything extraordinary, but what sets it apart from most other phones out in the market right now is the 144Hz refresh rate. The phone comes with 144, 120, 90 and 60Hz refresh rate options. In my brief hands-on with the phone, I actually figured out that there is a kind of variable refresh rate mechanism on the device which when on “Auto” mode does seem to switch around between the modes more seamlessly. It’s something to dwell into more detail once we have more time with the phone. What’s for certain is that the 144Hz mode is extremely power hungry – besides the refresh rate ZTE also uses a 300Hz input touch sampling rate which is extremely high for a non-gaming branded phone. 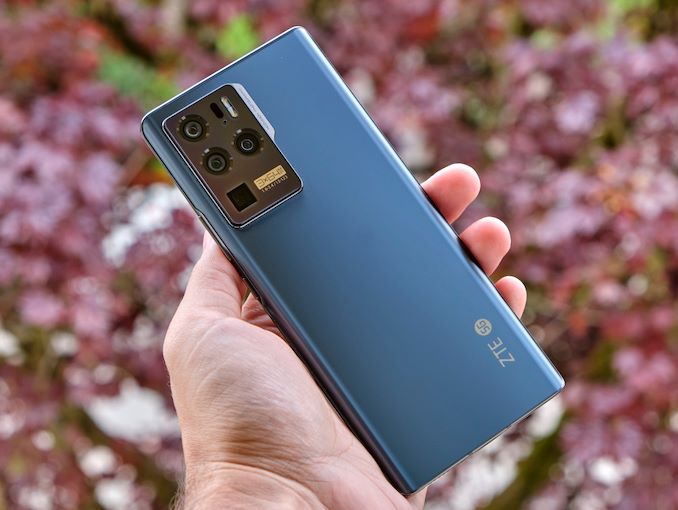 The back of the phone comes with frosted glass, and also has curved sides. The curvature here is more much pronounced than on the front screen glass, and it allows for excellent ergonomics and in-hand feel.

What’s actually more surprising about the Axon 30 Ultra is the fact that it comes with the “Ultra” designation. Usually, you would expect super large and heavy phones such as the S21 Ultra or the Mi 11 Ultra. The Axon 30 Ultra on the other hand is actually and unexpectedly quite reasonable in terms of dimensions and handling. At only 72.96mm width it’s a smaller form-factor than the competitor Ultra devices, and it also only weighs in at 188 grams, vastly below the other usual >220g Ultra phones. So, in that sense, the Axon 30 Ultra is more of a balanced phone in terms of size.

The phone gives up a few things to get to that weight and 8.0mm thinness. The battery is ever so slightly smaller at 4600mAh, but most notably it’s lacking wireless charging. It comes with a 65W USB PD PPS power brick included.

The top and bottom sides of the frame are flattened out; the top side is bare but for a microphone hole and the bottom includes your typical dual nanoSIM tray, USB 3.1 capable USB-C port, and the bottom speaker grill. 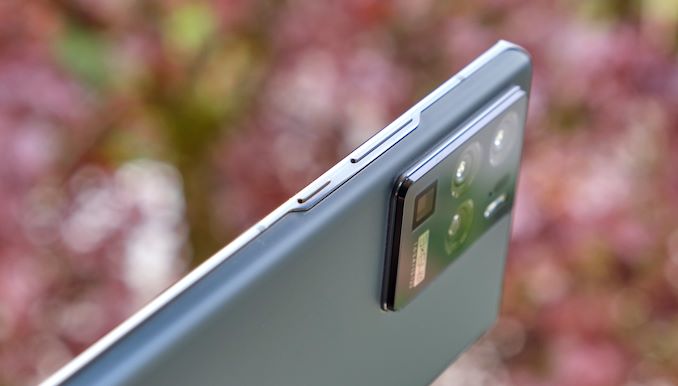 The side-buttons are located on the right side of the phone and in general of a nice quality and well positioned. Overall the first impression I got from the phone was that it was of excellent build quality, and given the size, weight, fit in well in my preferred sweet spot for devices. 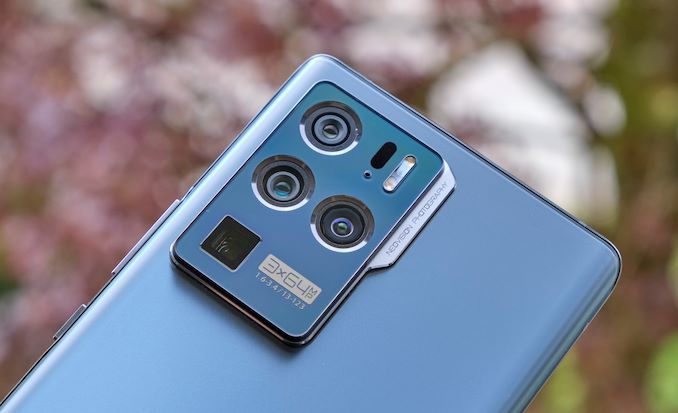 The real “Ultra” denomination of the phones comes from the camera assembly and the modules. It’s a bit unusual as it’s a unique take in the market: the phone features a quad-camera setup with three 64MP modules. The first module, usually referred as the “main” or sometimes “wide” module is a 26mm equivalent unit powered by an IMX686 which features 0.8µm pixels and bins down to 16MP 1.6µm pictures. The aperture is a wide f/1.6 and the optics feature OIS.

The unusual thing about the phone is a secondary 35mm equivalent unit, essentially 1.35x optical magnification, also powered by a 64MP sensor but this time it’s a Samsung powered GW3 unit with smaller 0.7µm pixels. ZTE calls this the portrait module but it’s still unusual to see such a focal length being used as most other vendors have traditionally settled for a 50mm equivalent. The optics are f/1.9 and features no OIS.

The ultra-wide module features the same GW3 sensor and features f/2.2 optics and 13mm equivalent focal length, capable of capturing a 120° field of view. ZTE promises an ultra-low distortion optics design to avoid fish-eye view and too much software side corrections.

Finally, the telephoto module is a 120mm equivalent focal length and represents essentially an around 4.6x optical magnification relative to the main sensor. The optics are f/3.4 and it features OIS, but the sensor is of a smaller 8MP size, keeping the general thickness of the module in check, which is why the camera setup and phone in general is thinner than competitive Ultra devices.

How the camera setup performs is also very much influenced by the software, but so far my first experiences with the camera and a few test shots have been actually quite positive, with the phone producing some good images in well-lit scenarios.

The key metric of today’s announcement was the pricing: Starting at €/$749 and £649, ZTE is asking for quite a seemingly competitive pricing for the Axon 30 Ultra. What will end up determining the device’s value is whether it holds up in terms of battery life and if the camera setup is indeed competitive.

Beyond the fundamentals, the Axon 30 Ultra is also extremely interesting for US readers given that it’s officially sold and supported in North America, giving a much-needed alternative in those markets where the usual flagship options have shrunk down to just Samsung and OnePlus. Given the more attractive pricing, if the phone pans out in terms of its fundamentals, it could very much represent a good alternative in the market.

Full review embargo as well as pre-orders for the phone start on May 27th – stay tuned for a more in depth evaluation.