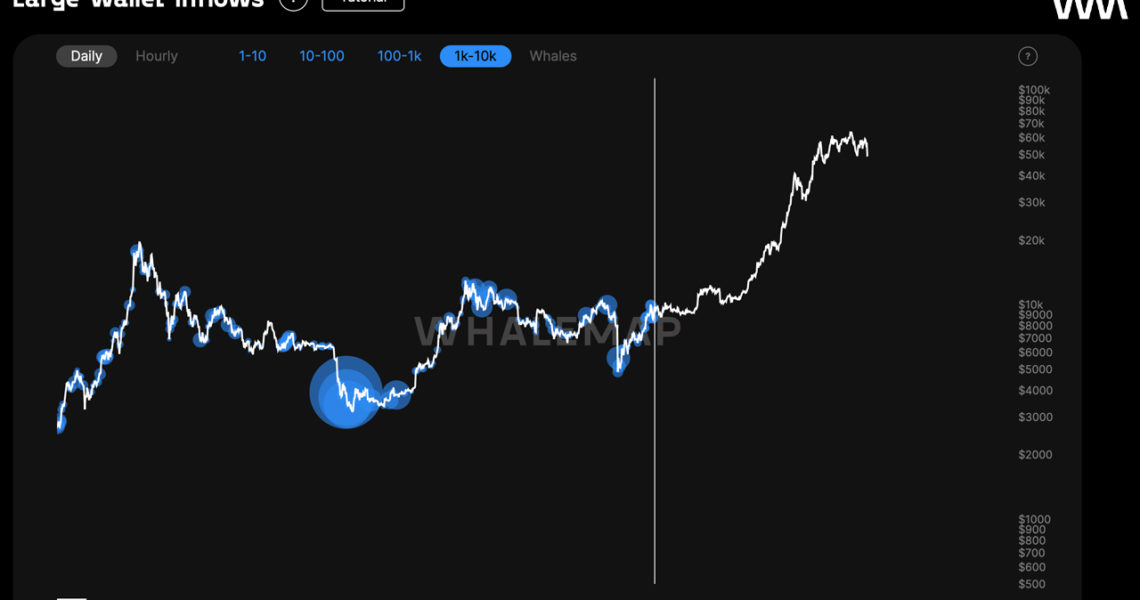 The price of bitcoin has seen better days, as the coin’s value hit $59,600 four days ago and then saw the exchange rate tumble to a low of $45,700 per unit on May 12. There have been talks of whales selling coins and data shows that there’s been some large wallet inflows. However, onchain data shows that the whales are either dispersing funds into multiple wallets or bitcoin is being distributed more evenly to smaller fish.

While cryptocurrency markets approach the weekend, traders and speculators are wondering what will happen next with these volatile price changes. During the last 48 hours, bitcoin (BTC) and a myriad of other digital currencies have seen massive fluctuations in fiat value.

As usual, cryptocurrency participants have been looking at the count of “bitcoin whales,” and have been assuming these large market players have been making massive waves. Most people consider a bitcoin (BTC) whale to be a holder that owns 1,000 bitcoin or more. A summary from bitcoinwiki.org states that a whale owns 1,000 to 5,000 BTC. A “humpback whale” or “mega whale” is classified as a BTC owner with 5,000 coins or more.

Now some whales are individuals, and other types of whales are entities like crypto investment funds such as Grayscale Investments’ Bitcoin Trust. During the last few days, a few reports have said that the number of BTC whales in the crypto ocean has been dropping considerably.

People often speculate on BTC whale action, but crypto market spectators only have a few tools they can use to whale watch. Recent reports have leveraged Glassnode’s “Number of Addresses with Balance ≥ 1k” chart in order to visualize bitcoin whales and watch them closely.

Glassnode’s data shows on Wednesday, just over 2,100 whales (addresses holding 1,000 BTC or more) exist, and last year during the same month, 100 more whales existed. This data does not mean whales are selling, as any owner of 1,000 bitcoins in one address can simply split the funds into two addresses or more.

We also have data stemming from a Bitcoin.com News report published on May 1, 2020. This article also covered the topic of whale counts and noted that whales obtained hundreds of BTC from “small fish.”

It is interesting to note, that three addresses have 100,000 to 1 million BTC held in a single address. This number has not changed in May 2021, and there are still three colossal whale addresses with 100k BTC or more. However, “humpback whale” or “mega whale” addressees have dropped in number and there’s not as many this year. One could insinuate that whales are distributing coins to “sharks (500 BTC),” “dolphins (100 BTC),” and “fish (50 BTC).” Or the whale addresses could simply be reorganizing into multiple lower quantity addresses that are still maintained by the same owners.