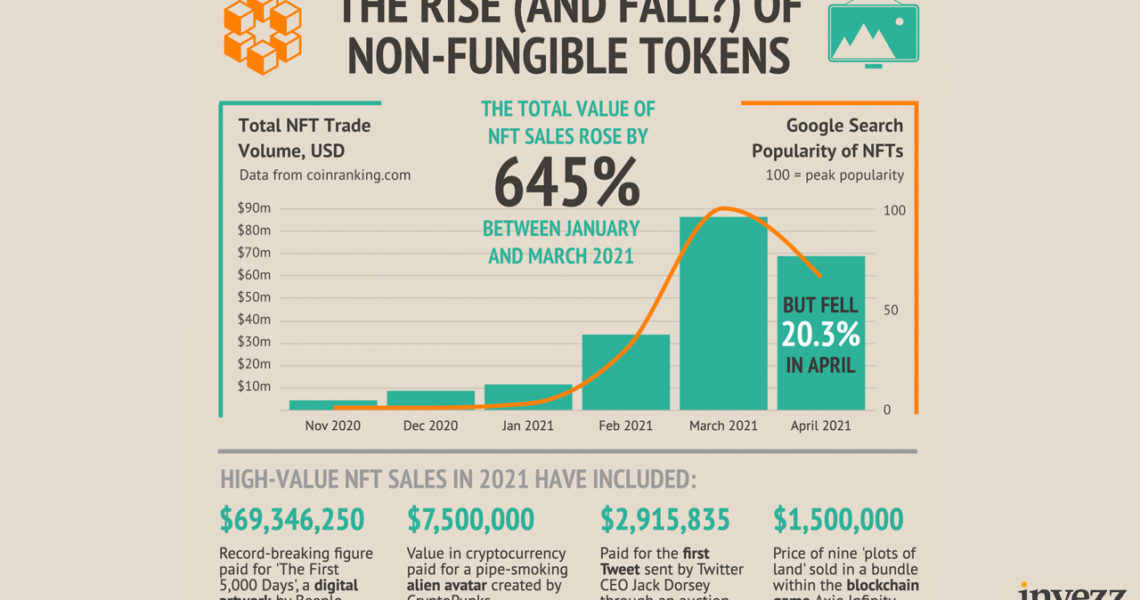 Depends on Who You Ask: Report Shows NFT Sales ‘Cool Off,’ Another Study Says ‘Market Set to Double by October’ In 2021, the non-fungible token (NFT) ecosystem has grown massively and data shows during the last month, there have been 98,832 NFT sales across over 32,000 active wallets. Monthly statistics show $272 million in recorded NFT sales have taken place but a recent report shows the NFT market is starting to “cool off” as NFT volumes have dropped. Although, another study suggests the NFT market could double in size by the fall.

Report Notes a ‘Cool Off’ Period in NFT Markets

NFT’s have become a huge success in 2021 and the market continues to show people are buying non-fungible token collectibles. Data from nonfungible.com’s market history shows out of more than 15,000 sales over $15 million worth of NFTs have been sold during the last seven days. This year has shown that nearly everybody is attempting to leverage NFTs in order to raise funds and the NFT trend has spread to world-renowned artists and celebrities.

However, a recent report from Sophie Kiderlin, a Markets Insider contributor, notes that the NFT market is “starting to cool off, as both prices and volumes fall.” Kiderlin highlights that after the notorious Beeple sale for $69 million, markets have seen a steep decline. “Sale volumes for art NFTs declined by almost 42%, making this the sector with the biggest losses. In the same timeframe, prices dropped by 40.5%. This translates to a sales value drop from over $71 million to $41.5 million as of today,” the report details.

Invezz NFT Study Disagrees With the Cooling-off Sentiment, Says ‘No Sign of the Bubble Bursting,’ and ‘Market Set to Double by October’

Kiderlin’s editorial further says that the only sector in the NFT space that has been doing well is “virtual plots of land and digital real estate” within the metaverse. The Markets Insider contributor’s data might be short-sighted, according to a recent report written by Invezz Newsdesk on Thursday.

It’s a stark contrast because the Invezz-written study says there is “no sign of the bubble bursting” and the “NFT market [is] set to double by October.” The forecast Invess supplies in its recent study predicts that the NFT market cap will increase “from $338 million in 2020 to $470 million in 2021.”

The Invezz study does recognize that the NFT sector saw a drop in volume this past April. “Is the NFT market a giant bubble set to burst?” the Invezz study authors ask. “The answer depends who you ask. The total trade volume of NFTs dipped to $68 million in April, leading some to conclude that the bubble was already bursting. Some feel that the price rise is pure tech speculation with little value or utility behind the products being sold. Some analysts say a market correction was inevitable following the boom in March.” The Invezz authors conclude by saying:

On the other hand, it’s far too early to conclude if the April data shows that interest has totally cooled. One month’s worth of data is hardly indicative of any longer-term trends. It’s not the first time skeptics have suspected that the NFT bubble will burst and the NFT ecosystem has been referred to as a “house of cards.” There’s also been a surge in NFT-related scams since the trend has grown exponentially. Despite these criticisms, the Invezz study does not see huge corrections affecting the NFT economy like BTC’s and ETH’s recent downturns.

The Invezz study authors concluded by adding that the NFT “market looks like it’s resistant to the forces that have caused a correction in the price of cryptocurrencies like Bitcoin and Ethereum in recent times. Thanks to its unique combination of innovative technology and creative freedom, the demand for NFTs shows no signs of slowing down.”