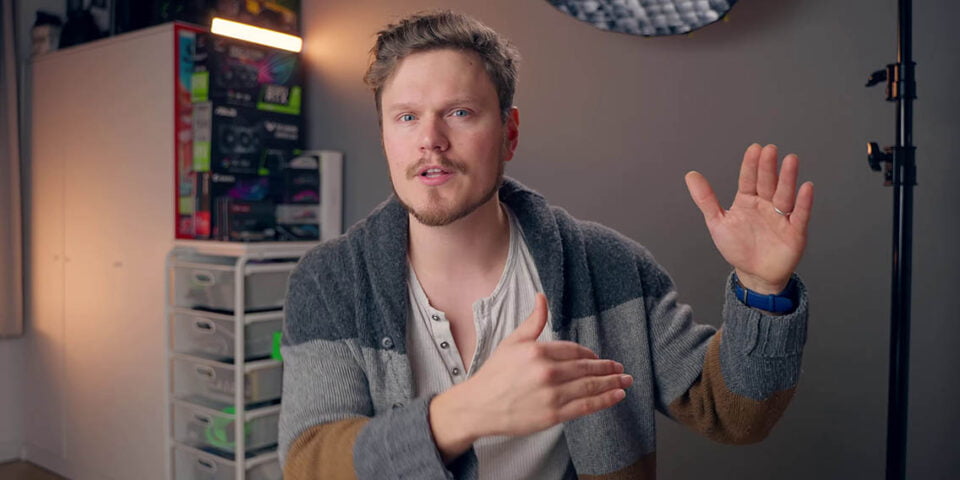 This AMAZING Keyboard Tech is sorta Pointless…for me

Analog switches what is the big deal? Wooting keyboards have been doing it for years, SteelSeries is in the game with their OmniPoint switches, and now the Razer Huntsman V2 Analog, which has the same switches we saw on the Razer Tartarus Pro but now on a full-size keyboard. This is not a review of that keyboard, but I want to use this keyboard as a jump off point into discussing analog switches, why they are important, but also why it’s mostly marketing.

I get that there are multiple technical advantages when it comes to analog switches, like the variable actuation points, multiple actuation points, and analog movement mimicking a joystick on the keyboard, but whenever I try to use it I always encounter all of these challenges. Those issues are exactly what I want to talk to you about today.

First of all, what is analog? In a traditional keyboard switch you have on and off state when you press it, but with analog you have 256 levels of that press. In simple terms, it is simulating movement of an analog stick on the joystick with the ability to have finer control in each direction depending on how far down you press. Challenge #1 is actually finger memory, because having precise vertical movement is incredibly difficult. Even if you reach the desired speed of your character in-game, it’s incredibly difficult to keep that as a constant because the nearby fingers are activating the nearby keys and therefore the pressure on that original key is going to change. The switches are linear and are perfectly smooth, so well done Razer, but they are not heavy enough to reach the desired control in that vertical movement.

Say you master the physical precision with your fingertips, Challenge #2 would be game compatibility. It is weird to say that in 2021 since analog keyboards have been out for years, but we still haven’t reached that perfect synchronization between the two. That is because the game has to support the controller, the keyboard, and the mouse at the same time, and sometimes a certain weirdness happens. For example, in some games as soon as you move the mouse the analog keys are disabled and you cannot use the two simultaneously. Obviously this is not an issue when you use WASD as keyboard inputs.

I have encountered the same issue in many other games, including the incredible Madmax where using the mouse to look around the car interrupts my analog controls and makes the game unplayable. Then I had this really strange experience in the game third-person open-world game Ashen that is perfect for controller and analog movement in general, but every time I would move my mouse after engaging in my analog movement there would be this weird stutter, almost like this weird lag after it starts to process both the controller and the mouse movement. I don’t experience the stutter with just the keyboard and the mouse. Then we have games that don’t have any mouse movement whatsoever, like the new cinematic horror The Medium, and this is actually a game where a controller is perfect. Having analog movement on your keyboard is kind of ideal because the standard was movement is janky since you move like a drunk robot, so having more finesse with my direction is actually quite good. Although I also had the game not recognize my analog movement whatsoever, but that is probably because of Synapse so not really game dependent. I thought the game was not recognizing my analog inputs, but in fact it was Razer’s software, which by the way has been a nightmare while making this article.

Then we have Pumpkin Jack where everything works with analog movement, no issues with the mouse, but when you are running around as Jack there is actually no point in having finer movement control with your keyboard because you can have super smooth and really accurate rotation with your mouse instead. I did find the movement when you are just a pumpkin head really nice with analog, so that is probably the only game I’ve experienced where there is that noticeable benefit. Then we have the game called Hades, which is an incredible title, and this one game where everything works just fine. You can see the difference in analog movement versus standard WASD, but for this game it’s not so much for the speed control but it is the angle of movement that is fantastic. It allows you to have really good control while running around. There are no issues with mouse movement and having that 360 degree of keyboard direction is a benefit in avoiding incoming fire and just accurately moving through each level.

And then there are two games that I thought would be fantastic for analog controls, but I was proved wrong. Those games were the underwater explorer game called ABZU, and a game that will absolutely test your patience called the MudRunner. In ABZU you swim in this beautiful underwater world and the keyboard controls by default have a really nice smoothness to them, so you don’t jerk around when trying to change direction. This means any analog input for finer control are not really necessary. In MudRunner the steering wheel already has a lot of weight to it with the standard WASD controls, so the only advantage you get with analog is the smoother visual rotation of the wheel and that only matters when you are inside the vehicle so you don’t see the unnatural small rotations when doing any finer adjustments in the standard WASD configuration.

Now to address the big elephant in the room and that this competitive Fortnite. We have received so many requests based on our polls on community and Twitter about why analog keyboards matter, and so many of you responded that Fortnite is one of those games that caused analog to explode in popularity because it gives you that 360 degree movement and apparently that is a big advantage for that title. I don’t play it so I don’t have downloaded, but just keep in mind that Fortnite + Analog is a killer way to dominate.

Moving on to Challenge #3 and that is the setup. All companies such as Razer, Cooler Master, SteelSeries, and Wooting are doing it differently from the software side. For example, there is no handholding from Razer to give you recommended key binds and configurations for specific game genres. I had to manually rebind my WASD area to the left joystick moment, save that as a different profile (because otherwise WASD is disabled even for typing), and then activate that profile in game when needed. For Wooting keyboards it is much simpler, there is an actual mode switch allowing you to go from standard keyboard to analog mode with the click of a button, while with Razer you have to create those two profiles separately.

Also none of the brands have a list of recommended games for analog movement, and that kind of sucks. Most just say that it’s great for driving games, it’s great for 360 degree movement, and I would definitely recommend you check out aimpad.com for a list of compatible games that even has notes on analog controls per game, which is super appreciated for new users. The only games I would recommend analog for are flying games, racing games, and third person games that work very well with the 360 degree movement as long as there is no weird issues with the mouse.

The next most practical and beneficial function of analog switches would be the adjustable actuation point. With Razer switches that range is between 1.5mm and 3.6mm adjusted in 0.1mm steps. It’s cool because you can alternate between high actuation point to mimic a fast switch or if you want to lower that actuation point all the way down to 3.6mm for heavy typing. It is a really cool hybrid to create one for gaming scenarios, one for typing scenarios, and it’s kind of nice to once in a while change the actuation point since it feels like having multiple keyboards built into one. The challenge is knowing what setting would be best for you, but luckily Synapse was updated recently to give you a visual indicator on the actuation point slider so you know exactly when the switch will actuate and set that point accordingly. SteelSeries also did a good job with the visual slider on the keyboard itself, so you can see what level you hit, and then in the software you have the range of 1 to 10 that corresponds to the tick marks on the screen.

And finally, the dual-step actuation point is really unique because it lets you have two functionalities on a single switch depending on how far down you press. For example, step one can be your regular W for default movement at let’s say 1.5mm, but as you fully bottom out that can be Shift + W for faster movements. In theory, this is awesome because you can activate multiple macros depending on what you play, but I had to ask around to get opinion on how this dual-step actuation point could be actually useful in games and not just as a feature that is kind of cool but never actually utilized.

And now we come back to Challenge #1 with precise finger movement, and that is relevant when it comes to dual-step actuation points. How do you activate the first point and not the second when they are so close together at less than 2.0mm apart. For anything FPS related analog movement and dual actuation points don’t work. In CS:GO and Escape from Tarkov and for my game style is completely useless and actually complicates things more than helping me evolve with the keyboard and use it to my advantage. I just can’t do it.

I want to finish with our community responses and our Twitter responses where we asked people if they wanted to play with analog switches. Most people said yes because it’s something new to them, but my advice is to maybe think about the commitment that it will take to retrain your fingers to properly utilize this whole analog dual-step actuation point before committing to a keyboard. If you are just gonna end up bottoming out and using the keyboard as a standard keyboard might as well look at the regular linear switch that is going to be much, much cheaper than the current analog options.

Lastly, software is everything to make sure that you have a good user experience when it comes to analog controls, especially for new users. Wooting is by far the best one in the business right now in terms of having a community that share profiles and have a really good support system. I feel like Razer, SteelSeries, and Cooler Master have to really step it up in order to give you a bit more guidance, because just diving into Razer Synapse and not knowing what the controls mean can be really tough and challenging. That is going to be one of the main areas that needs improving before these analog switches find a wider user base. Let me know what you think of this whole analog direction for keyboards and switches.