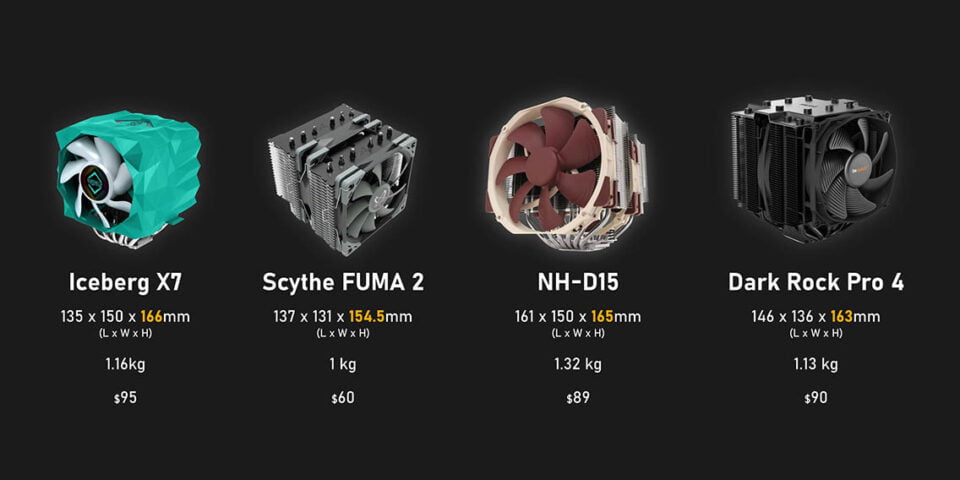 I’m going to start this review with a bit of a story, months ago a company called Iceberg reached out after we restarted our heatsink reviews. We get a ton of requests from different companies, but Mike and I actually thought that this whole thing was fake since every one of their products look like nothing more than a rendering, but even then these look like some of the most unique coolers around. So we ended up requesting something to see what actually would end up showing up, and figure that worst was we wouldn’t be getting anything or it might look like something you get from a failed Wish.com order.

Fast forward a bit, and this showed up: the Iceberg IceSleet X7 Dual. Funky names aside this thing actually looks pretty darn close to those renderings. Now yes you will need a pretty unique build to go along with this particular cooler, but I’m actually sort of digging this look.

Not only that, but this isn’t a custom job, it is actually available to buy right now at a steep price of about $95 USD. That prices makes a big statement about its performance claims since it puts the X7 right up against the legendary Noctua NH-U12A. It is also a heck of lot more money than the NH-U12S, NH-U14S, and my personal favorite the Scythe Fuma 2. The question that needs to be answered here is are you just paying for a fancy looking cooler or is there any actual performance to back up that price? Let’s find out!

First off I have to give some credit to Iceberg for using packaging that is completely recyclable. I keep saying this, but I wish more companies would do this. There has also been a lot of thought put into how everything is laid out. You have AMD components in one area and Intel in the other, so there is less chance installation items will get mixed up.

From far away I do have to say that the Iceberg X7’s multi-faceted heatsink cover looks pretty stunning, but up close it is a big piece of plastic. Don’t get me wrong there is absolutely nothing wrong with it, but it does cause some small gaps between the different pieces. This thing is just flat out unique, but I’m sure there is going to be people who fall into one of two groups. Either you hate it or you absolutely love it.

And of course there is RGB as well, with both the top logo and intake fan being illuminated. I mean it looks okay, but I think this whole thing is better without any lighting at all. At the same time this design leads to the same problem that Arctic faced with Freezer 50. Both the exterior 120mm and interior 140mm fans are completely built into the frames, so you can’t swap them or replace them if something goes wrong.

Either way, under all that plastic is a really, really well-built dual tower layout with super thin fin stacks. The plastic actually keeps a lot of the airflow focused at going through those towers, but I’m not sure if the static pressure on the fans is going to be enough to keep air moving efficiently. Those two towers are each linked to the end of seven 6mm diameter heatpipes that run into a really well finished nickel-plated copper base that looks gorgeous. All in all this thing is really well-built, a lot better than I expected from a pretty new company. Then again, the X7 costs almost $100.

As for the overall size, it is pretty bulky at 135mm long by 150mm wide and 166mm high, but the height shouldn’t be a problem for most ATX cases. The length causes some overhang on memory, and if that is the case there is only 45mm of clearance before smacking into the plastic. In general though, for such a chunky heatsink, compatibility shouldn’t be too much of a problem.

The installation process has both positive and negative points. You get clearly marked brackets and bags for Intel and AMD systems. And thankfully there is also a lot of common components for each platform so you don’t get a ton of parts to search through. The quality is on point as well, without anything feeling cheap, and that tube of thermal compound is a nice touch that should last you for 3 to 4 applications. I really appreciate the way Iceberg approach their installation manual as well, the directions are clear, the illustrations don’t need a magnifying glass to read, and all the parts being manipulated are highlighted in their brands teal color. Overall it’s really well done.

As for the installation itself, well on AMD it’s pretty straightforward. You remove the two side panels from the cooler, then carefully remove the top, making sure that you detach the small RGB power cable. From that point on you will need to remove the stock AMD mounting bracket, reuse the backplate, add studs, and then screw down the retention brackets for the cooler.

As usual Intel’s Socket LGA775, LGA1150 series, LGA1136, and LGA1200 are a bit more complicated since those Intel platforms don’t come with a backplate so you have to use the one that Iceberg provides. I appreciate them sticking to the branding with the blue and gray look, but I hate that it’s plastic. The next steps are the same for every platform and I’m not too crazy about it. Installing the top bracket is pretty straightforward, but for some bizarre reason Iceberg didn’t pre-install the retention arm that has the 2 screws on it. Instead you will need to use the little thumbscrews to secure it in place. Anyways, once that is on just tighten it in place and then get ready for some serious frustration. You the plastic panels might look pretty, but getting them back into place without any gaps is a total pain in the ass. Sometimes you might get lucky, but just be ready to spend maybe 15 minutes or so of pure frustration.

Another thing you will need to take into consideration is memory clearance. Like I mentioned before since the integrated fan will overhang into the slots of most motherboards, so you can’t have memory modules that are more than 45mm tall.

With that out of the way, I think it’s time to move on to our usual temperature testing. Starting at the 120W setting, which basically covers a lot of the mid-to-high-end processors. For anyone wondering here is how the speed percentages on these fans align with decibel readings on this cooler. We are going to start adding these as guidance for anyone who buys one of these heatsinks and wants to replicate our results.

Starting with temperatures over time, here the Iceberg X7 is able to give similar results to some of the best coolers around at pretty comparable noise levels. It may be 1°C or 2°C hotter, but anything under 65°C is a really respectable result that will cover a good 95% of users out there. It won’t touch the Fuma 2 though, that is just one impressive cooler. One interesting thing you will notice is the X7’s results carry a lot further to the right in all of our charts, and that is because its fans get much, much louder as their RPMs level increase. They go all the way up to a screaming 50dB, and at least at these low heat loads those high fan speeds don’t do a darn thing. Meanwhile, the graph only starts at 36dB since setting the fans to anything under that causes them to stall out. Now for those of you who like something a bit simpler to look at, with a few more coolers added, the chart shows how everything lines up. You can see there isn’t a single heatsink that struggles here, unless you go with something on the lower-end.

Switching to 165W, and this is where things start going a bit janky for the X7 in comparison to the competition. I mean don’t get me wrong under 75°C at 165W heat load it is still completely acceptable, but not for almost $100. There is something else I need to point out, and that is the massive dip between 38dB and 40dB that points towards the fans having a very, very narrow sweet spot where they deliver optimal cooling performance. Meanwhile, at a standardized 30dB, the X7 trails the pack, but remember increasing fan speeds just a bit to 40dB makes a world of a difference here.

Now this next test is really, really intense because it is actually above Iceberg’s maximum 225W TDP spec for this cooler, but we decided to do it anyway. The result was pretty much expected with the cooler failing the test at 110°C up until the 40dB noise mark, even then it stays at or above 100°C until the fans are screaming along at over 70% and louder than anything else in our charts. I really can’t fault Iceberg for this since we are pushing beyond their recommendation. Sadly, at 30dB it couldn’t stop the CPU from throttling, so there isn’t really much to see here.

Overall, the Iceberg X7 doesn’t try to hide what is, it’s a heatsink that is trying to look super unique while also delivering respectable cooling performance. Now regardless of what you think of teal plastic and the RGB combination, that is exactly what it is even if the numbers on groundbreaking. I do need to put this into perspective though, because we put this cooler up against the best of the best and a cooler doesn’t need to be on the top of a chart to get our approval. The only thing going against the X7 is really it’s price, and of course the janky shroud installation. If you can get past that, and if you want something that looks super unique, you can be confident that it will perform pretty well at reasonable decibel levels. But otherwise, if you are looking for just raw performance, there are a lot of better options out there, many of which cost a lot less. On that note, thank you so much for reading this review, and let me know what you think about the Iceberg X7. Does it give you that WOW Factor? I’m just curious to know.